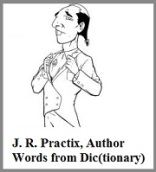 When I received the menu at the Getting Older Cafeteria, there were many items listed which were unappetizing:

But some of the nastier dishes afforded to those who are joining the Gang Just Over the Hill are:

All of these particular offerings place those with “graying futures” in dispositions where things start sticking in their craw.

It’s an old-time phrase—matter of fact, many younger folks would not know the meaning (and should be commended for their ignorance). But they would recognize the phrase easily if you changed it to a word they are more accustomed to: bratty.

I guess you reach a certain age when you just can’t be a brat—so what you have to do instead is “get something stuck in your craw.”

The two conditions certainly appear to be the same. The sour facial expressions are identical. The grumping and complaining, spot-on.

But once your birthdays have accumulated to a certain heap, you are no longer allowed to be a brat. You just get things stuck in your craw.

I, myself, am very careful to make sure this never happens to me. So intent was I to guarantee that nothing got stuck in my craw that I actually went out and had my craw removed.